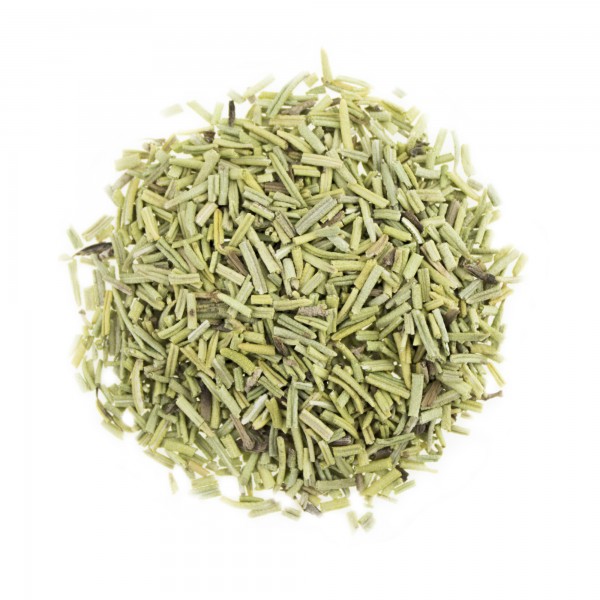 For digestive weakness (stimulates the production of gastric juices) and general weakness, for cramps, stimulates bleeding.

Rosemary as a tea:

Men: 3 teaspoons (approx. 5g), women 2 teaspoons (approx. 3g) of chopped rosemary leaves with 1/2 litre of 80° hot water and steep for 20min, covered.Strain and drink in 3-4 small cups daily. To stimulate appetite before meals, otherwise after or between meals. As a cure over 6-8 weeks.

Rosemary was already highly valued in the Mediterranean region in ancient times. It was dedicated to Aphrodite, the goddess of love and beauty. Troubadours presented rosemary to the lady of their choice, Ophelia tied a rosemary wreath to Hamlet as a sign of her fidelity and in Germany brides wore a rosemary wreath for a long time before myrtle came into fashion. In some areas rosemary is still used today as a bridal bouquet. The Egyptians gave rosemary twigs to their dead to sweeten their journey to the land of immortal souls with its fragrance; in Greece, rosemary wreaths were made for the dead. Branches of rosemary were placed in the cradle of small children to protect them. In literature, rosemary appears as a plant for the dead in Shakespeare and Hebel. As "Hungarian Queen's Spirit" or "Hungarian Water", rosemary essential oil dissolved in spirits of wine became one of the first perfumes. Allegedly, it helped the paralysed 72-year-old Queen of Hungary to such great youth and beauty that the King of Poland asked for her hand in marriage. Even today, perfumes contain rosemary essences. In the first century AD, rosemary was introduced to Central Europe by monks. In the monasteries of that time, it was considered an important medicinal plant. It was not only recommended for all kinds of complaints, but also to strengthen the potency. Dioscorides mentions that rosemary has a warming power. When boiled in goat's milk, rosemary was said to help against tuberculosis, and externally the milk was used against skin cancer. The name "rosemary" is of Latin origin and means "dew of the sea". Morning arm baths in water with rosemary essential oil can work small miracles. But it also has a wide range of other effects. With its stimulating effect, it is relatively rare among medicinal herbs, which is why it plays an important role in the treatment of low blood pressure. Garden owners should not do without it, for it is not only an ornament to the rock or herb garden but also a whole natural medicine cabinet combined in one medicinal plant. In the plant sector, rosemary brewed as a tea has an antifungal effect on various harmful fungi and can thus be used as a home plant protection or strengthening agent.

Rosemary is native to the Mediterranean region and was introduced to Central Europe as early as the first century AD and is also popular in Germany. The medicinal plant grows wild in the western and central Mediterranean to North Africa, especially in coastal regions from Portugal to the Ionian Sea. The species has also been cultivated in the eastern Mediterranean region and on the Black Sea since ancient times and occasionally occurs wild, sometimes even forming populations, e.g. on Santorini. Rosemary prefers sunny, dry, lime-rich sites. Rosemary is often cultivated as an ornamental and spice plant.

This perennial medicinal plant is a 0.5- 2 m tall, evergreen, bushy branched semi-shrub with needle-like leaves and has an intensely aromatic scent. It is not entirely hardy, except for special varieties, so in Central Europe it is mostly grown in tubs. The branches are brown and mostly upright. Older branches have flaking bark. The narrow, linear leaves are evergreen, so they do not fall off even in winter. On top they are deep green and wrinkled and covered with a protective skin, on the underside of the leaf white to greyish hairs. The edges are rolled downwards. This protects the leaf from drying out. These leaves grow opposite each other directly on the twigs, are quite hard and have a strong balsamic scent, similar to camphor. Because of this scent, rosemary was sometimes used as a substitute for incense, which earned it the name "incense herb". Between March and May, and sometimes in September, rosemary blooms with light blue lipped flowers. The flowers are arranged in whorls in the leaf axils and can appear all year round. When cultivating this medicinal herb, waterlogging should be avoided.

However, you can also collect the flowering herb or only the flowers. The collected leaves or flowers should be dried quickly but gently. Gentle drying is important so that the essential oils do not evaporate. For use in the kitchen, you can cut off the fresh shoot tips of rosemary all year round. In winter, however, you should be modest about doing so, because the plant does not grow again until spring.

Rosemary is best known for its use in Mediterranean cuisine. However, it is also an important medicinal plant with diverse and powerful healing effects. In naturopathy, rosemary is used internally as a tea to stimulate the circulation and against flatulence. Above all, it stimulates the blood supply to the abdominal organs and thus the formation of gastric and intestinal juices. It also has a bile and diuretic effect and is used as a tea or spice to stimulate the appetite. Rosemary is one of the few medicinal herbs that can strengthen low blood pressure. This effect on low blood pressure is due to the strengthening of the heart and circulation, so high blood pressure does not rise any further. Nervous heart complaints and cardiac arrhythmias can also be treated with rosemary. Rosemary is particularly good for strengthening the nerves. It can also be used to relieve headaches and migraines. Rosemary can be taken internally or applied externally, for example by rubbing the diluted essential oil on the forehead. Rosemary can induce missed periods and relieve menstrual cramps. Rosemary can also help with menopausal symptoms.

Rosemary also increases blood circulation externally and is therefore used in baths for poor circulation and circulatory problems as well as for gout and rheumatism (for example, as rosemary spirit). In addition to rosemary spirit, the ointment can also be used for rheumatism and migraine. As a bath remedy, the infusion has a disinfecting effect and promotes the healing process of infected, poorly healing wounds.

For circulatory problems, rheumatic diseases, strains, a 6-10% preparation in the form of bath additives or in 6-10% ointments is indicated. Internally, 3 - 4 drops are taken on sugar or in warm tea.

Normally, the leaves of rosemary are used, but the flowers also contain many active substances and can be used.

You can use this herb internally as a tea, in tea mixtures and as a tincture.

Rosemary wine can be used for a strengthening rosemary cure.

For this, 200 g of rosemary leaves are mixed with a litre of wine and left to steep for a week, shaking occasionally. Strain the wine and drink a small glass twice a day.

Rosemary tincture can be used for external rubbing or diluted as a partial bath. It has an invigorating effect and can also relieve joint pain and neuralgia.

Rosemary spirit can be used in the same way as rosemary tincture.

For rosemary spirit, mix 3 ml of essential rosemary oil with one litre of 70% alcohol.

It is so strong that it should only be used externally so that it does not irritate the stomach. You can vaporise it in a fragrance lamp to revitalise it, or you can drop it into water and bathe in it. For example, to bathe the forearms in warm water to invigorate and stimulate the circulation. Here, not only does a physical reflex triggered by the warmth have a beneficial effect on the heart.

Rosemary is also an important spice in Mediterranean cuisine. It gives many dishes the right aroma. It goes very well with meat, cheese and vegetables. However, rosemary should be used very sparingly, because its seasoning power is enormous. If you use too much, it will mask all other flavours.

Rosemary has preservative properties for fatty meat. It is also used to flavour soaps, perfumes, snuff and alcoholic drinks.

Excessive doses can cause intoxication and convulsions.

Rosemary should not be used during pregnancy!

Thyme, rubbed, organic
From €4.65 *
Content 0.05 Kilogramm (€93.00 / 1 Kilogramm)
Viewed
Trusted Shops Reviews Toolkit: 1.1.5
This website uses cookies, which are necessary for the technical operation of the website and are always set. Other cookies, which increase the usability of this website, serve for direct advertising or simplify interaction with other websites and social networks, will only be used with your consent. More information
Accept all Configure