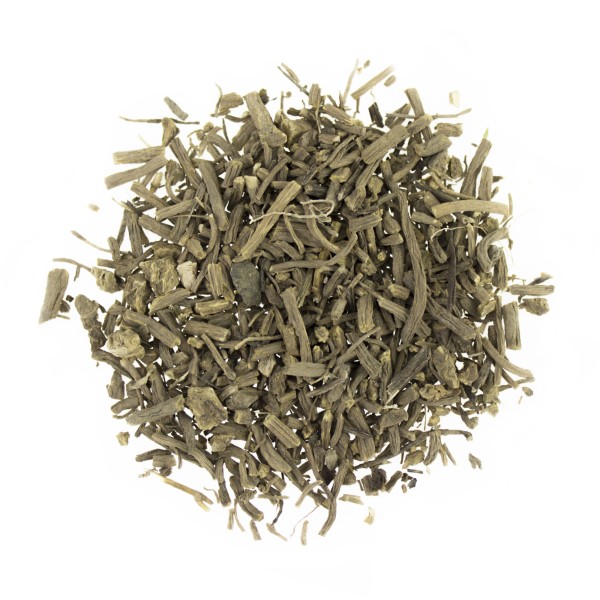 Application
Preparation of valerian tea: 2 teaspoons of crushed valerian roots with 1/4l cold water pour over and let stand for 10-12 hours. Occasional stirring of the mixture is recommended. If necessary, this tea can be drunk 1 cup 2-3 times a day. This high dosage is harmless and guarantees optimal effect.

History:
In the past, valerian (Valeriana officinale) was at times considered a panacea. Already in ancient times, Dioscorides recommends valerian as a warming remedy with diuretic and menstrual effects. He calls the valerian "Phu". Hildegard von Bingen sees in valerian a remedy for pleurisy. Hippocrates, Tabernaemontanus and Paracelsus also valued valerian as a valuable medicinal plant. Among other things, valerian was used against eye diseases, epilepsy and even against the plague. Also among the Germanic tribes, valerian, as Baldur's plant, had the reputation of being a panacea among medicinal plants. This notion was adopted in the Middle Ages by most of the peoples in whose lands this medicinal plant was native. It was not until the 17th century that the calming effect of valerian on the nervous system became more widely known. To protect against evil spirits, valerian was hung on the door in Northern Europe. Hung in the room, a bouquet of valerian was supposed to indicate when a witch entered the room, because then it would move. To protect themselves from the devil or enchantments by witches, some people carried a piece of valerian root.

Botanical description:
Valerian is a medicinal plant 50-180 cm high, has a short rhizome with numerous brown, creeping, unpleasantly strong smelling roots. In spring, the unpaired pinnate leaves grow out of the ground first, forming an airy cushion. In late April, the first erect, furrowed, sparsely hairy stems with opposite, imparipinnate leaves with lance-shaped tips emerge. The basal leaves are relatively large. The stem leaves become smaller towards the top. The lower stem leaves are petiolate and hairy, the upper ones are glabrous and attached to the stem. The terminal, multiple trifoliate inflorescence is umbel-like and has numerous, stalked flowers. The corolla of the individual flowers is 3-6 mm long, pale pink to whitish, tubular below, funnel-shaped above, and consists of 5 fused petals, the tips of which are free. The calyx consists of 5 small cymes curled inward, which grow out to pappus as the fruit ripens. The one-seeded, nut-like fruit develops from the underset ovary. This medicinal plant is a perennial herbaceous perennial, so the plant is always growing new in the spring. A delicate pleasant fragrance emanates from the flowers of this medicinal plant. Cats, as well as rats, are particularly fond of this scent, so valerian is also called cat herb. Some people also find the scent of valerian flowers rather unpleasant, especially when it rains. The roots of this medicinal herb with its numerous fibers are brown on the outside and whitish on the inside. The smell of the roots is perceived by significantly more people as unpleasant, especially if they smell strongly after drying. It is quite different for cats, who love the scent of valerian and are crazy about it.

Occurrence:
Native to Europe and Asia. In northeastern America, the drug is now also cultivated. The medicinal plant comes mainly from cultures in England, Eastern Europe, Belgium and partly from Germany.

Habitat:
moist deciduous forests, shrubberies, tall shrubberies (up to 2,000 m) It is found on the banks of streams and ditches, in moist meadows, and along forest edges. Other species of valerian grow in other areas of the world, most of which have similar effects to native valerian.

Cultivation tips:
In the past, valerian was very often grown in typical peasant gardens. The reason for this was not only the medicinal and ornamental effect, but also the ability of valerian to aerate the soil and attract earthworms. Thus, valerian in the garden promotes the growth of vegetables and other plants. The soil for valerian should be sufficiently moist and deep, and the location should be sunny to partial shade. You can also grow valerian in large containers, but then you need to water them frequently. In some garden stores and special shippers you can get seeds or ready-made plants of valerian. In early spring, sow the seeds under glass in seed trays or small pots. From May, they can also be sown outdoors, if the soil there is not overgrown by other plants for several weeks. It is important not to cover the seeds with soil, because these medicinal herbs are light germinators. The seed needs almost a month to germinate. Therefore, you need a lot of patience. Once small plants have grown, plant them out at a distance of 50 cm to 1 meter. The same applies to ready-bought plantlets. By late summer, the new valerian plants develop into strong medicinal herbs. But only after two to three years they are fully grown. If the valerian forms runners, these small plants can be separated from the mother plant in the spring and planted out at the appropriate distance.

Collecting tips:
The roots of valerian are collected in autumn, when the flowering season is long gone. Then the roots are dug up. It is best to leave some of the root behind so that the medicinal plant has a chance to grow up again. The roots are brushed off and rinsed briefly with cold water. Then they are cut into small pieces and dried in a warm place as quickly as possible. The flowers are collected in midsummer, when the plants are in full bloom. Then they are dried in a shady place. Caution. To prevent cats from contaminating the parts of valerian to be dried, the drying should be done in a place that cats cannot reach.

Medicinal properties:
sedative, relaxant, concentration enhancer, antispasmodic, sleep inducer, The root of valerian has a primarily sedative effect. The effect of valerian is supported by medical studies. Even the function of the individual active ingredients has been studied. The sesquiterpenes in valerian change the function and excitation transmission of the so-called GABA receptors in nerve cells. This leads to a relaxing and decramping effect. The valerenic acid in valerian supports this effect by changing the metabolic activity of nerve cells. Due to this relaxing effect, valerian can be used not only for sleep disorders and nervousness, but also for numerous health complaints associated with restlessness and cramps. Numerous other species of the genus Valerian (Valeriana) have a similar effect as the native true valerian. A Mexican relative of valerian, Valeriana edulis, has a particularly large root with very intense effectiveness.

Application and dosage:
For calming, for nervous-induced difficulties in falling asleep, for high blood pressure, asthmatic complaints, flatulence, high blood pressure, intestinal cramps, gallbladder complaints, gastritis, headaches, cramps, stomach cramps, gastritis, migraine, nervous heart complaints, Nervousness, neurodermatitis, exam anxiety, irritable bladder, back pain, hyperthyroidism, sleep disorders, restlessness, tension, menopausal symptoms In all states of nervousness, insomnia and many psychosomatically caused diseases (e.g. e.g. stomach ulcer or cramps) valerian can be used as tincture, tea or powder (e.g. tablets). For insomnia, a tea of valerian, hops, mugwort and lemon balm drunk slowly in small sips is recommended before bedtime. Since valerian does not make you tired, it can also be used for exam anxiety. Meanwhile, valerian products are available in every major supermarket. They can replace many psychotropic drugs, because they are not only less dangerous but also not addictive.

Mode of administration: as plant infusion, tincture, extract or other galenic preparations (internal), or as bath additive (external)

Infusion: 2-3 g of drug per cup, once or several times daily

Tincture: 1 to 3 ml once or several times a day extracts:
For difficulty falling asleep 400 to 900 mg extract half to 2 hours before bedtime For restlessness 300 to 450 mg throughout the day

Valerian tea:
Valerian tea preferably as a cold extract. To do this, pour one to two teaspoons of valerian root with a cup of water. The tea is left to steep for about twelve hours. Then filter and warm the tea to drinking temperature. Drink in small sips. If you are in a hurry or in tea blends, you can also prepare the valerian root as an infusion and then steep the tea for 10 to 15 minutes. If you want, you can also use the flowers of valerian as a tea. The valerian flowers are much milder than the root and smell more pleasant. They are not usually available in stores, so you have to harvest them yourself. With the valerian flowers, you can choose to prepare a cold extract or an infusion and drink it as a tea.

Valerian tincture:
To make your own valerian tincture, pour double grain or spirit of wine over valerian in a screw-top jar until all parts of the plant are covered, and let the mixture steep, sealed, for 2 to 6 weeks. Then strain and pour into a dark bottle. One takes one to two teaspoons of this tincture in the evening or when needed. If the tincture is too concentrated, it can be diluted with water. There are a lot of tablets and dragées with valerian on the market and in pharmacies. The dosage of these remedies is very different and ranges from light, for daytime use, to strong, for pronounced sleep disorders. Often the valerian remedies are also combined with other medicinal plants, such as hops, lemon balm or passion flower.

Special instructions: Do not use during pregnancy, breastfeeding or in children under 12 years of age without consulting a doctor, as there is no experience yet on the safety. In case of acute complaints that last longer than a week or recur periodically despite treatment, consultation with a physician is recommended. Preparations of this medicinal plant are usually well tolerated when used as directed. Gastrointestinal disturbances are rarely possible.

Influence on reactivity: After an evening intake of valerian preparations, an impairment of the reactivity and the ability to actively participate in road traffic or to operate machines is not to be expected on the following day. A reduction in the ability to react is possible in the first hours after ingestion.

Duration of use: Sleep promotion occurs gradually and takes effect only after 5 to 14 days. The safety of long-term use (over 4 weeks) is not known. There are reports of a so-called valerian addiction. After long-term, high-dose use, valerian preparations should not be abruptly discontinued, but the dose should first be gradually reduced.

Drug interactions: The effect of other sedatives or sleeping pills may be increased or prolonged. This is especially true in connection with alcohol. Valerian preparations should also be discontinued before planned operations, as they may interact with anesthetics.

Licorice root, cut, organic
From €4.65 *
Content 0.05 Kilogramm (€93.00 / 1 Kilogramm)
Viewed
Trusted Shops Reviews Toolkit: 1.1.5
This website uses cookies, which are necessary for the technical operation of the website and are always set. Other cookies, which increase the usability of this website, serve for direct advertising or simplify interaction with other websites and social networks, will only be used with your consent. More information
Accept all Configure