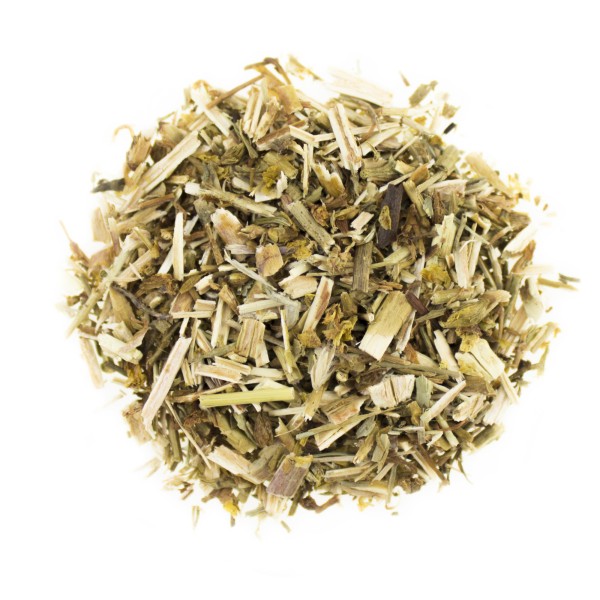 Supportive for nervous restlessness and anxiety, for bronchitis, rheumatism, gout and joint pain, externally for wounds and burnsHerbal plants

St. John's wort is the best known typical midsummer plant of the medicinal herbs. Even its name is derived from St. John's Day, on 24 June. In the days around the summer solstice, St. John's wort opens its bright yellow flowers. Like hardly any other plant, this medicinal plant is associated with the sun, whose power it absorbs on the longest days of the year in order to give it to us humans during the darker days of winter. St. John's wort brings warming rays of sunshine to depressed minds. It was already praised in antiquity by Dioscorides, Pliny Secundus and Galen. In the Middle Ages, it was one of the prized plants of Paracelsus, who recommended it primarily for its wound-healing and blood-cleansing abilities. The connection between St. John's wort and light also played an important role even then. Already in the Middle Ages, St. John's wort was used against melancholy, but this was forgotten until orthodox medicine proved its antidepressant effect in scientific studies in the 1970s. Since then, St. John's wort has been the most important herbal antidepressant. The light-sensitising effect of St. John's wort was first observed in grazing animals that had eaten large amounts of St. John's wort and subsequently developed white patches on their fur, the so-called light sickness. St. John's wort was also considered a protection against demons. Farmers hung it in their stables to protect their cattle from demons. In people's homes it was hung on the window cross to ward off evil spirits. Its name "devil's curse" derives from this use, because even the devil is said to flee from St. John's wort. A wreath of St. John's wort thrown on the roof used to protect the house from lightning. To drive away a thunderstorm, some St. John's wort was sprinkled on the cooker or burnt in the oven. At the midsummer dances around the St. John's fire, the girls wore wreaths of St. John's wort. Classical herbal medicine and modern anthroposophical medicine, however, regard St. John's wort as a medicinal plant that can store the sunlight of midsummer and then release the joy of the sunny summer in the gloomy winter to brighten and warm the spirits. Seen in this light, one can certainly drink a St. John's wort tea instead of commercial preparations.

St. John's wort (Hypericum perforatum) is native to Europe, North Africa and North Asia. It grows on roadsides, sparse bushes, embankments, on dry slopes, meadows, mountains, in forests and even on rubble tips.

St. John's wort is a 50- 100 cm tall, glabrous plant. The widely branched rootstock sprouts a grassy tuft of erect stems that are branched in the upper part. Two edges run down from the back of each leaf to the next. The opposite leaves are barely stalked, ovate to linear and with entire margins. The translucent spots are caused by the oil gaps in the leaf. The flowers are on mostly black-glandular, 1 - 2 mm long stems in a terminal, umbel-like inflorescence. The 5 green, narrow sepals are about 6 mm long, lanceolate, glabrous with entire margins and covered with light or dark glands. When the flowers are crushed, the fingers turn reddish. The 5 golden-yellow, free, 10- 15 mm long petals are elliptical and usually notched on one side at the edge. The ovary is surrounded by 50- 60 stamens. There is a black gland between each pair of anthers. The ovoid, upper ovary grows from 3 carpels and bears 3 styles with small, dark red stigmas. It develops into a three-lobed capsule with numerous seeds. The upper part of the plant is bushy-branched. The leaves have reddish-brown spots which contain the red oil.

The flowering herb with fresh flowers.

June to August
St. John's wort is collected in the morning as soon as the dew has dried. Tie the collected herb into small bundles and hang them upside down in an airy, shady place to dry. The collected flowers are either immediately put into oil or dried quickly in an airy place.

Conventional medicine holds the active ingredient hypericin responsible for the antidepressant effect. This main active ingredient is only contained in the flowers, hyperforin, on the other hand, in the ripe fruits The content of individual ingredients is highly dependent on the stage of development of the plant and exposure to light.

There are numerous empirical reports and studies on the drug and preparations made from it, which speak for a mild effect on depression. According to experimental findings, hypericin is a monoaminooxydase inhibitor. Oily hypericum preparations have an antiphlogistic (anti-inflammatory) effect. However, the exact mode of action is still unknown; presumably several components of the extract are involved in the mood-lifting effect. Therefore, only preparations containing the whole extract are recommended. An influence on the nerve messengers serotonin, noradrenalin, dopamine, GABA and glutamate as well as a modulating effect on certain receptors in the brain are suspected.
Extracts have also been shown to have anti-inflammatory (flavonoids), antiviral (hypericins) and antibiotic (hyperforin) effects on gram-positive bacteria in laboratory tests.

Preparations from St. John's wort are often used for depression and related nervous restlessness and sleep disorders. St. John's wort is also a valuable medicinal plant for other diseases of the nervous system. It helps with nervousness, insomnia and anxiety. Headaches and migraines can also be alleviated. St. John's wort also makes a valuable contribution to neuralgia such as trigeminal neuralgia or lumbago. It can be taken internally and the affected part of the body can also be rubbed with St. John's wort oil. In mild cases of epilepsy, St. John's wort can reduce the tendency to seizures. However, this use should always be accompanied by a doctor, because on the one hand this medicinal plant can interfere with the effect of other antiepileptic drugs and on the other hand a failure of the antiepileptic therapy has potentially dangerous consequences, such as accidents or even status epilepticus with possible fatal consequences. The digestive effect of St. John's wort has almost been forgotten in view of its effects on the nervous system. But St. John's wort strengthens the stomach and intestines, relieves inflammation and helps against diarrhoea. In addition to the tea, St. John's wort oil can also be taken internally to treat digestive problems. Take one teaspoon of the oil three times a day. St. John's wort also has a lot to offer against women's complaints. Its antispasmodic properties relieve period cramps. It also contains beta-sitosterol, a substance similar to oestrogen, with which it harmonises irregular cycles and can alleviate menopausal symptoms. Since the menopause is often accompanied by depression, St. John's wort is an ideal medicinal plant for this important phase of life. In addition to the numerous internal uses already described, St. John's wort tea or tincture can also be used for bladder infections. It also helps with rheumatism and gout. Even bronchitis and other inflammations of the respiratory organs can be relieved. St. John's wort can be used externally as a tea or diluted tincture in the form of washes, baths and compresses. However, the best-known external application of St. John's wort is the bright red St. John's wort oil, which is made from the fresh flowers. The oily hypericum preparations are suitable for the external treatment and aftercare of sharp and blunt injuries, strains, myalgias (muscle pains) and 1st degree burns. Infected wounds, ulcers and neuralgia can also be relieved by St. John's wort oil. Due to its versatility, St. John's wort oil belongs in every medicine cabinet.

Photosensitisation is possible, especially in fair-skinned people. An overdose of the drug can therefore lead to skin inflammations.
Do not use in cases of known photosensitivity.
Do not use if severe depression is suspected. St. John's preparations are not effective in this case; treatment by a doctor as soon as possible is absolutely necessary.
Do not use during pregnancy or breastfeeding without consulting a doctor.
There are no studies that prove its safety.
Do not use on children!
The treatment of depressive disorders in children should always be carried out by a specialist.
Do not use if you are taking medicines at the same time whose effect can be influenced by St. John's wort. These include ciclosporin, tacrolimus, medicines against HIV (AIDS) such as indinavir, cytostatics such as irinotecan and other antidepressants.
As with other antidepressants, the mood-lifting effect only occurs gradually and treatment over a longer period of time is necessary. However, if there is no improvement in symptoms after 2 - 4 weeks, a doctor should be consulted.
Recent studies have shown that high doses of St. John's wort extracts can interact with other medicines, which can have considerable effects on health.
Therefore, people who are already taking other medicines should consult their doctor or pharmacist before using appropriate St. John's wort preparations. Likewise, patients taking St. John's wort preparations should inform their doctor about this medication if they are prescribed other medicines.
For example, it cannot be ruled out that St. John's wort preparations impair the effect of oral contraceptives (birth control pills) and that this could lead to intermittent bleeding and even to an unwanted pregnancy. Furthermore, St. John's wort induces the transporter protein P-glycoprotein (MDR-1), which excretes certain medicines, such as digoxin, from the cell and thus contributes to reduced bioavailability. Serotonin syndrome can occur if drugs that also have serotonergic effects, such as triptans or SSRIs, are taken at the same time.
However, St. John's wort preparations are generally very well tolerated. Rarely, gastrointestinal complaints, allergic skin reactions, tiredness or restlessness may occur.

Tilia spec.,silver, cut flowers, controlled...
From €5.95 *
Content 0.05 Kilogramm (€119.00 / 1 Kilogramm)
Viewed
Trusted Shops Reviews Toolkit: 1.1.5
This website uses cookies, which are necessary for the technical operation of the website and are always set. Other cookies, which increase the usability of this website, serve for direct advertising or simplify interaction with other websites and social networks, will only be used with your consent. More information
Accept all Configure