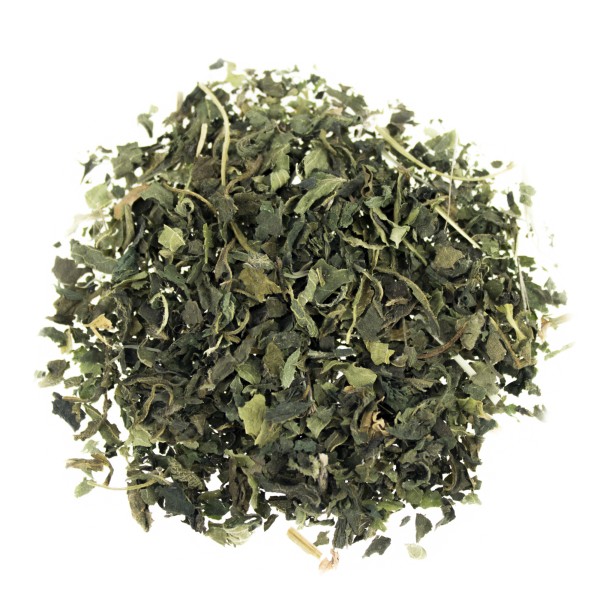 Indication
To increase the amount of urine, for bladder and kidney infections, for further indications see below.

Application
Pour 1/4l boiling water (optimal 80°C) over 3-4 heaped teaspoons of nettle leaves, leave covered for 15min and then strain. 3 cups per day over a period of 6-8 weeks.

History:
Almost everyone knows the pungent nettle, and there is hardly a person who does not sooner or later make the acquaintance of the burning properties of the plant. That is why it is often avoided, even though it should have a place of honour in every garden as an important medicinal plant.
However, it usually takes this place of honour for itself, because it is very persistent and undemanding and grows almost everywhere it is allowed to grow.

Even in ancient times, nettles were described in detail and used as a remedy. The fibre obtained from the stalks was used as a substitute for cotton. Today, the active ingredients of stinging nettle seeds are relatively unknown, although they were already highly praised in a 17th century herbal book. Later, horse traders mixed nettle seeds into the feed and thus brought fire into the muscles and shine to the coat. If you mix nettle seeds into chicken feed, they lay more eggs, and nettle seeds can also be added to bird feed. If there were a book about the use of herbs in modern nutrition, nettle seeds would have to be at the top of the list, especially since our ancestors knew exactly what powers the small seeds contained. They were of course not yet aware of the individual ingredients, yet they were once found in every love potion.

Botanical description:
Great nettle is a 60- 150 cm tall perennial herb with stinging hairs on shoots and foliage leaves. When the fresh plant is touched, the spherical tips of the stinging hairs break off, releasing their contents into the skin and causing the typical burning sensation on the skin and the formation of wheals. Young leaves and shoots do not yet have stinging hairs, so they can be eaten as a nutrient-rich vegetable or salad. Upright, unbranched, four-edged leaf shoots sprout from the widely branched, underground rootstock in spring. The opposite, stalked leaves are toothed, ovate, heart-shaped at the base and long-pointed at the front. They each have two narrow stipules at the base. The panicle-like inflorescences with the long-stalked flowers are in the leaf axils in the upper part of the shoots and are longer than the leaf stalks. The flowers each have 4 petals. Each medicinal plant has either only female or only male flowers. The male flowers stand stiffly off, develop only short lateral branches and have 4 stamens and a depressed, infertile ovary. The female flowers hang down, develop long lateral branches and have a unifoliolate ovary. After pollination, mainly by the wind, a one-seeded nutlet develops. The annual small nettle (absent rhizome) grows only 15 - 45 cm tall and only up to 60 cm high. It produces male and female flowers on the same inflorescence. It usually grows in groups and often on cultivated soil that is as nutritious as possible. It is therefore often a crop follower and accompanies people to their villages and towns. The plant prefers soils rich in nutrients and can spread rapidly.

Plant parts used:
Medicinal use is found in the leaves, roots and seeds of the great nettle, Urtica dioica.

Nettle herb consisting of the fresh or dried aerial parts of Urtica dioica LINNÉ, Urtica urens LINNÉ and / or their hybrids collected during flowering, and preparations thereof in effective dosage.

The drug has a mild diuretic effect (diuretic). Extracts of the root have been discussed for some time as "prostate remedies", which are able to improve the symptoms in the initial stages (I and II) of benign prostatic hyperplasia (benign enlargement). Increases bladder filling volume and maximum urine flow, decreases the amount of residual urine.

This medicinal plant works wonders, especially in spring, by helping to flush out the winter's waste products from the body. It can be drunk as a tea, added to salads, soup and eaten like spinach. Well seasoned and together with other medicinal herbs it tastes wonderful and gives fresh strength.
As a tincture, stinging nettle can be used externally as a hair tonic to care for the scalp against hair loss, greasy hair and dandruff and can be massaged into the scalp.

Nettle herb or nettle leaves:
Internally and externally to support a treatment of rheumatic complaints. Particularly courageous rheumatism patients can be beaten with the whole plant to take advantage of the irritant effect of the stinging nettle poison. However, one should be careful with this method because overreactions to the nettle poison can occur.

It also does very well dried in kidney-bladder tea mixtures. It also helps against rheumatism and gout because it flushes toxins out of the body. Internally for flushing in inflammatory diseases of the draining urinary tract, also for the treatment and prevention of kidney gravel. Ensure sufficient fluid intake. The anti-rheumatic effect is attributed to caffeoyl malic acid, which has anti-inflammatory properties.

Special advice:
Do not use irrigation therapy in cases of oedema (oedema of the tissues) due to impaired cardiac or renal activity. When flushing, make sure to drink plenty of fluids. When a fresh nettle plant comes into contact with the skin, an itchy wheal forms immediately. Therefore, gloves should be worn when picking the herb (contact urticaria).

There is insufficient scientific evidence for many of the effects attributed to the drug in folk medicine (e.g. anti-rheumatic). We must warn against the use of nettle as a diabetic tea, which is sometimes recommended in folk medicine, as nettle cannot have any favourable effect on diabetes.

Rose petals, Rose blossoms, rubbed, organic
From €9.95 *
Content 0.05 Kilogramm (€199.00 / 1 Kilogramm)
Viewed
Trusted Shops Reviews Toolkit: 1.1.5
This website uses cookies, which are necessary for the technical operation of the website and are always set. Other cookies, which increase the usability of this website, serve for direct advertising or simplify interaction with other websites and social networks, will only be used with your consent. More information
Accept all Configure