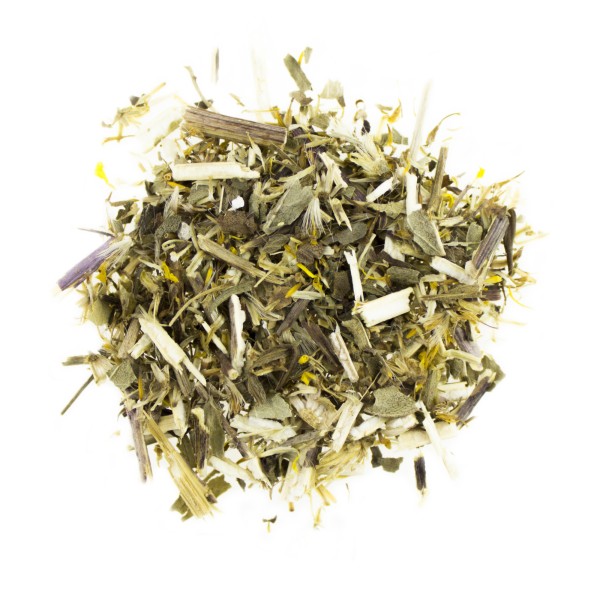 Diuretic, strengthens the kidneys, for mild inflammatory diseases of the urinary tract (cystitis) and for kidney gravel.

Pour 250 ml of boiling water over 2 heaped teaspoons of goldenrod herb and allow to steep for 20 minutes, covered. Take 3 cups daily for 6-8 weeks.

Goldenrod is the lush yellow of late summer. It grows in large colonies on gravel and along paths and makes the world shine a little when the flowers of high summer have long since faded. The common goldenrod is used as a medicinal plant because of its effect, especially for bladder and kidney problems. It has a strong diuretic effect. In the Middle Ages it was also used as a "wound herb". Because of its flavonoid content, goldenrod can also be used to dye wool. The fabrics get a golden yellow tone.

Almost all of Europe, Asia, North America, North Africa. These medicinal plants are found in sparse forests, on heaths, pastures, dry forest meadows or clear-cuts. Goldenrod thrives on both calcareous and acidic soils.

Goldenrod, which grows up to 1 m but usually around 40 cm tall, is a perennial medicinal plant with a cylindrical, tuberous rhizome. The upright downy-haired stems, usually unbranched except for the upper part, usually have only a few leaves. These alternate stem leaves are stalked and ovate in the lower part of the plant and turn into narrow lanceolate, stalkless leaves towards the top. The leaf margin is usually irregularly toothed, only rarely almost entire. The numerous flower heads are in a racemose or narrowly paniculate, terminal, basket-shaped inflorescence, 6 - 18 mm long and 10 - 15 mm wide. The narrow-lanceolate sheathing scales have membranous margins and form a rolled sheathing calyx. From the yellow, hermaphrodite, five-toothed tubular flowers, 8 - 12 likewise yellow, female, clearly longer ray florets can be distinguished at the edge, from which the styles with the stigmas and the stamens glued together to form the tube protrude from the corolla. The hairy, egg-shaped fruits are 3 - 4 mm long and have a pappus. From the end of July, beginning of August the goldenrod flowers bright yellow with many small flowers.

Real goldenrod herb, consisting of the above-ground parts collected during flowering and gently dried, as well as its preparations in effective dosage.

Flowering and collecting time is from July to October.

Flavonoids and saponins, phenolic glycosides such as leiocarposide and virgaureoside, inulin, tannin, bitter principle. The essential oil contains, among other things, the sesquiterpene γ-cadinene as the main component, which is also present in juniper.

Goldenrod herb is excellently suited for flushing out inflammatory diseases of the draining urinary tract, urinary stones and kidney gravel, as well as for preventive treatment of kidney stones and kidney gravel. Furthermore, extracts from goldenrod are also used for the treatment of irritable bladder, characterised by an increased urge to urinate, pain and burning when urinating. Canadian goldenrod in particular can be crushed and applied to insect bites. Some Indians also chew the flowers for sore throats.

Goldenrod can be drunk as a tea or prepared as a tincture or herbal wine.

Make sure to drink plenty of fluids. Do not use flushing therapy for oedema caused by impaired heart or kidney activity.

Do not use in case of hypersensitivity to goldenrod or other daisy plants!

Licorice root, cut, organic
From €4.65 *
Content 0.05 Kilogramm (€93.00 / 1 Kilogramm)
Viewed
Trusted Shops Reviews Toolkit: 1.1.5
This website uses cookies, which are necessary for the technical operation of the website and are always set. Other cookies, which increase the usability of this website, serve for direct advertising or simplify interaction with other websites and social networks, will only be used with your consent. More information
Accept all Configure