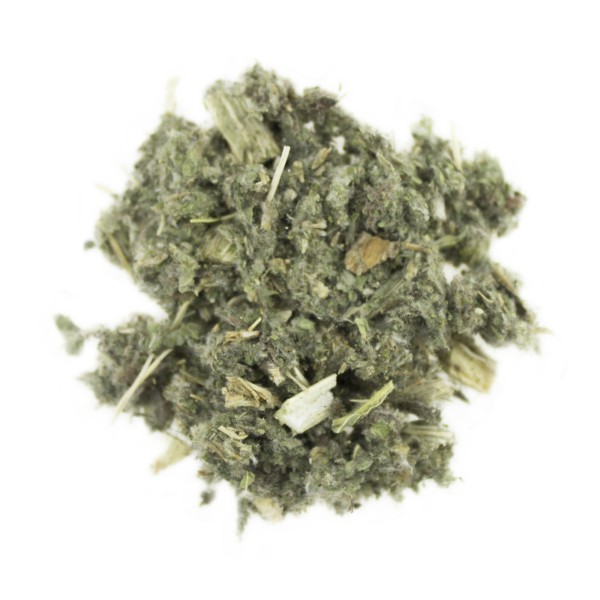 Preparation of artichoke tea: 1 teaspoon of dried artichoke leaves with 150ml of hot water (80°C). Cover and steep for 10 minutes and strain. Optionally, this bitter tea can be sweetened with honey. Drink a cup half an hour before a meal to stimulate the appetite. Also one cup after a meal to aid digestion.

The artichoke is said to have spread from the Arabian countries to the Mediterranean region about 2000 years ago, although in some regions it was thought to be deadly. So for a long time it was more of an ornamental plant. In the meantime, the artichoke is cultivated wherever the climate permits. Artichokes are a delicious vegetable, but most people only know the canned bottoms as a topping for pizza. Eating the fresh bud heads, on the other hand, is a pleasurable culinary adventure. Moreover, artichokes are also medicinal plants, because they promote the work of the liver and gall bladder, lower cholesterol levels and help with weight loss. They can also be supportive in cases of diabetes.

Botanical description of the medicinal plant :

This vigorous thistle plant, up to 2 m tall, with a strong rootstock, forms a rosette of leaves in the first year and sprouts an erect stem in the second year. The large spiny leaves are deeply pinnately lobed, stalkless on the stem, green above and somewhat lighter below. The fist-sized, solitary flower heads consist at the base of a globular sheath of broad, acuminate bracts, fleshy in the lower part. The numerous, five-petalled, about 10 cm large tubular flowers are blue to violet in colour, the flower base is fleshy. The artichoke lives for about 5 years in a warm sunny climate.

Artichoke leaves, consisting of the fresh or dried foliage, sheaths of the flower heads, and their preparation in effective dosage. Plant juice, root

The drug contains caffeoylquinic acid derivatives such as cynarin, cynaropicrin, cynaroside, flavonoids (esp.glycosides of luteolin) and bitter substances (sesquiterpene lactones), enzymes, tannic acid, inulin, scolymoside, calcium, magnesium, phosphorus, vitamins B, C and E. In the fresh leaves, cynarin is only present in traces, but it is formed during drying as well as during extract production.

The ingredients promote bile formation and bile flow and are used for non-specific digestive complaints such as flatulence or bloating and irritable bowel syndrome. It is also known to have a blood lipid-lowering effect. Luteolin has been shown to inhibit the formation of the body's own cholesterol, and it also promotes the excretion of fats via the bile. Furthermore, preparations from artichoke leaves have antioxidant and liver-protective properties. Cynarin, which was originally thought to be the active principle, is only found in small quantities in the fresh plant and is only formed during the preparation of the extract (heat treatment). In the meantime, the effectiveness of this medicinal plant is attributed to the total complex of flavonoids and quinic acid derivatives contained in the leaves. Preparations containing only cynarin have meanwhile disappeared from the market

Good experiences have been made with the artichoke around the digestion.

Take 1 teaspoon of dried artichoke leaves and pour over 150 ml of boiling water, cover and let steep for 10 minutes, then pour through a sieve and sweeten the bitter tea with honey if needed. To increase appetite, drink a cup half an hour before eating. For good digestion, drink a cup immediately after a meal.

Press the juice from fresh leaves or buy it as ready-made fresh plant juice.
Drink about 25 ml of the juice. It is good for stomach aches, indigestion and increases well-being.

The usual recipes cook the fleshy parts of the artichoke flower in hot salted water with a little lemon for about 30-40 minutes. In this preparation, almost all the valuable ingredients are lost and the effect is less that of a medicinal plant and more that of a culinary delight.

Italian doctors advise boiling a piece of the stem with the heads and drinking the slightly bitter-tasting boiling water throughout the day.

Do not use in cases of hypersensitivity (allergy) to daisy plants!

Do not use if the bile ducts are blocked.

Guayusa, energy tea, from controlled organic...
From €6.40 *
Content 0.05 Kilogramm (€128.00 / 1 Kilogramm)
Viewed
Trusted Shops Reviews Toolkit: 1.1.5
This website uses cookies, which are necessary for the technical operation of the website and are always set. Other cookies, which increase the usability of this website, serve for direct advertising or simplify interaction with other websites and social networks, will only be used with your consent. More information
Accept all Configure