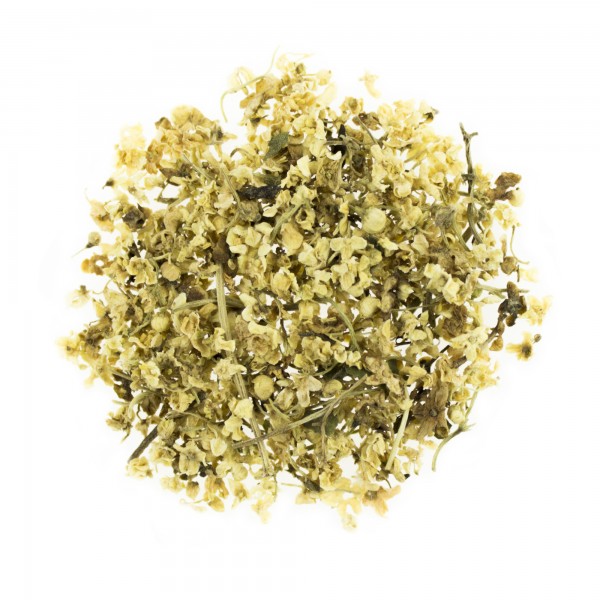 Use
Pour 1/4 l boiling water (optimal 80°C) over 2 heaped teaspoons of elderflowers and steep for 10 minutes. When used as a sweat tea, drink half a litre of this tea very warm. In case of rheumatic complaints, drink it for a short time (over 3 weeks 3 times a day 1 cup of tea).

Elder has played an important role in medicine for thousands of years. Hippocrates from Greece, who lived from 460 to 377 BC, praised the healing power of the elder. He even called it a medicine cabinet. Elder was recommended for constipation, dropsy and women's complaints. These are uses that are still typical of elderberry today. Theophrastus of Eresos, Pliny the Elder and Dioscorides also described and praised the elder. North of the Alps, the Celts and Germanic tribes regarded the elder as a sacred tree that embodied the goddess. The good spirits of the house were supposed to dwell in the elder and protect the house and its inhabitants from harm. For this reason, the elder should neither be pruned nor cut down, because removing the elder would deprive the good spirits of their dwelling place. Since the elder can grow very large within a few years (up to 7 m high and very wide), it often takes up a lot of space in the garden. In addition to medicinal purposes, the elder was also used for numerous magical purposes. As a tea, its flowers are often used for sweating cures for fever and colds. The black berries are very rich in vitamin C and can be taken as juice, puree or jam.

It forms either as a shrub or also as a tree up to 7 m tall and is often very bushy and broad. The leaves are imparipinnate. The flowers are small, yellowish-white in a dense, umbrella-shaped raceme. They have a fruity, spicy scent with the unmistakable aroma of elderberry. In late summer to autumn the flowers ripen into black berries. The fruits are small, spherical and shiny black-purple. The blood-red juice is highly colouring. Elder trees like to grow close to houses. Often it really nestles up against the houses. The bark of the trunks and branches is warty and smells slightly unpleasant. The twigs are hollow and contain a soft pith. Therefore, elder twigs are also popular for making simple flutes.

Mainly the flowers and the berries.
Caution. The green part of the plant is poisonous

For medicinal purposes, the flowers are used as tea and the fruits as wine or mush. Elderflower tea has a strong diaphoretic, diuretic and blood-cleansing effect and is therefore used for all illnesses that can be improved by expectoration, i.e. coughs, flu, pneumonia, colds, rheumatism, etc. Externally, elderflower tea can be used for skin care; minor burns and skin inflammations can be soothed. Elderflower tea is also suitable for strengthening the immune system. The detoxifying properties of elderflowers support slimming cures.
The ripe berries should never be eaten raw, as they can cause vomiting. They are effective as a mush for intestinal inflammation, neuralgia, sciatica and as a blood purifier. Elderberry wine regulates bowel movements, relieves intestinal colic, stimulates the appetite and strengthens the circulation.
Since elderberries contain a lot of vitamin C, when drunk as juice they are suitable for increasing the body's defences in winter, so that colds do not occur in the first place. The berry juice also has a mild laxative effect.
Leaves and bark:
The leaves and bark are said to have a stronger laxative effect. However, these are slightly toxic, so it is better to use other laxatives.
The leaves also have a healing effect on the skin. They can be used as an ointment against bruises, sprains and skin wounds. The leaves can also be used as a poultice.

Pour 1 litre of boiling water over approx. 5-5 g of elderflowers, strain for 20 minutes and drink the whole litre throughout the day (it is best to strain directly into a thermos flask so that the tea stays warm). Cure for as long as you are ill or for 6-8 weeks.

Hibiscus flowers, whole flowers, organic
From €4.70 *
Content 0.05 Kilogramm (€94.00 / 1 Kilogramm)
Viewed
Trusted Shops Reviews Toolkit: 1.1.5
This website uses cookies, which are necessary for the technical operation of the website and are always set. Other cookies, which increase the usability of this website, serve for direct advertising or simplify interaction with other websites and social networks, will only be used with your consent. More information
Accept all Configure