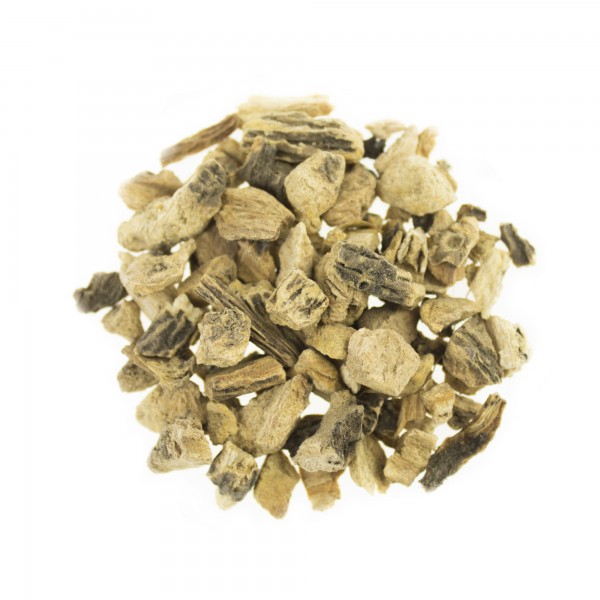 Use
Pour 1/4 l of water over 1 teaspoon of cut gentian root and boil for 5 minutes. The tea must be drunk moderately warm before the main meals. Another preparation, in which the end product does not contain as many bitter substances and above all no tannins (i.e. it is milder in its effect), is a cold brew, which must be left to infuse for 8 to 10 hours (with the same initial quantity).

Throughout the centuries, gentian has been popularly used, especially for digestive complaints, but also for general states of weakness and anaemia. Herbalist Kneipp also valued gentian and recommended growing it in the garden so that its healing power would always be available. The yellow gentian was valued early on as a medicinal plant because of its intense bitter substances. Its name goes back to the Illyrian king Gentis of antiquity, who was skilled in healing and used the gentian to treat the plague. As the yellow gentian is rather disliked on cow pastures and used to be extracted on a large scale as a medicinal plant and for herbal bitters, it became rarer and rarer until it was so rare that it had to be placed under nature conservation. In the meantime, populations have recovered thanks to protection. The root of the gentian can be obtained in pharmacies and herb shops. It is mainly effective because of its strong bitter substances. Thus, the main effect of gentian root is to stimulate digestion, which is a typical effect of bitter substances. However, as a side effect, so to speak, gentian is also invigorating and strengthens the circulatory system. However, gentian should not be used if blood pressure is too high or during pregnancy. The blue gentian, about which songs are sung, is incidentally a close relative of the same genus. It has similar constituents, but is less medicinal.

The yellow gentian is a typical mountain plant and grows mainly on the mountains of the Alps. It is also found on the highest mountains of the Black Forest and the Vosges, as in France, Spain, Balkan countries, Germany.

The yellow gentian (Gentiana lutea), is a glabrous plant up to 1.40 m tall, with a hollow, stem-round, erect stem, up to finger-thick, grooved in the upper part, sprouting from the multi-headed, sparsely branched taproot, up to arm-thick. The crossed, opposite, elliptical, strongly longitudinally veined, bluish-green leaves grow up to 30 cm long and up to 15 cm wide. In the upper part of the plant they are stalked, in the lower part stalkless. In the upper part of the plant the leaves are transformed into cup-shaped bracts, in the axils of which about 3-10 long-stalked flowers are united in umbels. The bell-shaped to tubular, 5-toothed, pale yellow calyx is slit on one side. The wheel-shaped, yellow corolla is divided into 5-6 narrowly lanceolate, pointed tips almost to the base. The free or fused anthers are almost as long as the corolla. The ovary has 5 lobed glands at the base, its stigma is bilobed and is later rolled back. The 6 cm long fruit is a pointed cone-shaped capsule with numerous strongly flattened seeds with membranous margins. The gentian is a perennial plant that can live up to sixty years. However, it also grows quite slowly and usually only flowers after ten years.

The thick, branchy root grows up to one metre long. Particularly massive specimens can weigh up to four kilos. The roots are brown on the outside and yellow on the inside. The roots of the poisonous white ginger, whose leaves resemble those of the gentian, are much shorter and white inside. This makes it possible to distinguish between the two roots.

From June to the beginning of August, the gentian flowers with yellow blossoms that grow in dense whorls above the leaf tiers.

Gentian root, consisting of the dried roots and rhizomes and preparations thereof in effective dosage.

The root is collected in the following months: March, April, August, September.

As the yellow gentian is protected in some countries, it is recommended to obtain the root from the trade.

The main active substances are the bitter substances contained in the root. These stimulate the taste receptors, leading to a reflex stimulation of saliva and gastric juice secretion. For this reason, it should not be used by people with gastric or duodenal ulcers. Animal experiments show evidence of an increase in the amount of bronchial secretions.

The bitter substances contained in the roots make gentian root a strong stomachic that promotes digestion, which is the main use of gentian. This stimulates the formation of gastric juices, stimulates the appetite and alleviates heartburn. Yellow gentian also has a mild laxative effect and can thus relieve constipation. Folk medicine also uses gentian to prevent colds. It also promotes menstruation. In the past, gentian was also used to treat fainting spells and cold hands and feet.

You can drink gentian as a tea or take it as a tincture.

The dried pieces of the root can be prepared as an infusion. To do this, pour a cup of boiling water over half a teaspoon of gentian root and let the tea steep for 5-10 minutes.

As a cold extract, pour cold water over half a teaspoon of gentian root and leave to infuse for 8 hours. Then strain and gently heat to drinking temperature.

To stimulate the appetite, drink a cup of cold or moderately warm tea half an hour before meals, and after meals for digestive complaints.

For a tincture, douse the finely chopped gentian roots with double grain or spirit of wine and leave the mixture to infuse in a sealed jar for 2-6 weeks. Strain and take 10-20 drops 3 times a day before meals.

Occasional headaches may occur in particularly predisposed persons. Since the stimulation of gastric acid production worsens the clinical picture in gastric and duodenal ulcers, the use of gentian root preparations is contraindicated.

Ginseng root, white, cut, organic
From €16.70 *
Content 0.05 Kilogramm (€334.00 / 1 Kilogramm)
Viewed
Trusted Shops Reviews Toolkit: 1.1.5
This website uses cookies, which are necessary for the technical operation of the website and are always set. Other cookies, which increase the usability of this website, serve for direct advertising or simplify interaction with other websites and social networks, will only be used with your consent. More information
Accept all Configure