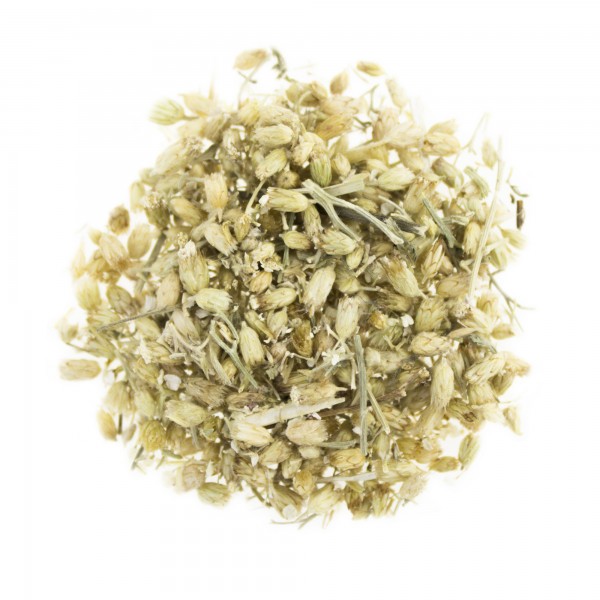 For loss of appetite, digestive complaints, mild, cramp-like complaints in the gastrointestinal tract In gynaecology for painful menstruation, excessive or weak menstruation, can counteract fibroid growth, antispasmodic, to strengthen the vessels in varicose veins and haemorrhoids; to calm the uterus in cases of bleeding and premature labour; for nausea during pregnancy Hildegard von Bingen recommends yarrow for inflammations of all kinds. It can be used internally and externally for this purpose.

Pour 1/4 l boiling water over 2 teaspoons of the flowers, cover and leave to infuse for 10 minutes. Drink 3 cups per day over a period of 6-8 weeks.

Yarrow is one of the oldest medicinal plants and is already mentioned by Pliny, Hippocrates and Dioscurides.
Pastor Kneipp is said to have written about it: "Many mischiefs would be spared women if they would reach for yarrow once in a while!" The name Achillea millefolium is derived from the war hero Achilles, who is said to have treated the fresh war wounds of a comrade-in-arms with yarrow before Troy, while the species name millefolium (= thousand leaf) alludes to the finely divided leaf blade. In folk medicine, preparations of yarrow are used for local haemostasis. However, its effectiveness has not been proven.

Yarrow is native to the whole of Europe up to the Arctic Circle; it is only rare in Mediterranean regions. It prefers sunny, dry locations on field margins, meadows, pastures, uncultivated land and along roadsides.

Yarrow is a perennial, hairy medicinal plant up to 60 cm high. In spring, the roundish rootstock sprouts pinnate leaf shoots and erect, tough and internally pithy stems that do not branch until the inflorescence. The leaves are arranged in a basal rosette on the leaf shoots. The 4-8 mm wide flower heads of the plant are very numerous in a flat, umbel-like panicle. The ovoid 3 - 5 mm long involucre is formed by yellow-green, light brown to black-brown, membranous-edged bracts. The purely female 4-6 ray florets are at the edge of each head. They have a broad, ovate, three-toothed tongue and are white sometimes even slightly pink. In addition, each flower head has tubular, dirty-white disc flowers with a five-petalled corolla, stamens and an ovary. Skin-like scales sit between the flowers on the base of the head. The ovaries ripen into elongated, laterally short-winged, up to 2 mm long, silver-grey to yellowish fruits without pappus.

In the flowering season from June to October, cut off the whole flowering herb about a hand's breadth above the ground. Then tie small bundles of the medicinal plants and hang them with the flowers down in a dry, shady place. As soon as the yarrow is dry, unhook it, chop it up preferably with scissors, and store it in a cool, dry place away from light.

Essential oil, in it monoterpenes, such as camphor and cineole, sesquisterterpenes, such as guaianolides, which include the proazulenes such as achillicin, azulene, eucalyptol, tannins, flavonoids, bitter substances, antibiotic substances (sesquiterpenoids such as achillic acid esters), salicylic acid, coumarins, polyols, triterpenes and betaines.

For angina pectoris (supportive), loss of appetite, high blood pressure, bleeding, circulatory disorders, biliary colic, skin irritations, haemorrhoids, varicose veins, poor circulation, rheumatic complaints, dyseptic digestive complaints, mild, cramping complaints in the gastrointestinal area, portal vein congestion, for wound healing.
Yarrow is used in gynaecology for painful menstruation, excessive or weak menstruation, can counteract the growth of myomas, has antispasmodic properties, strengthens the vessels in varicose veins and haemorrhoids, for ovarian inflammation, to calm the uterus during bleeding and premature labour; for nausea during pregnancy, for sitz baths in pelvipathia vegetativa (painful cramps of psychovegetative origin in the female pelvis).
Internally, yarrow preparations are used for loss of appetite and mild, cramp-like complaints of the digestive organs (inflammation, diarrhoea, cramps) and to stimulate the production of bile. The ability of yarrow to promote the return of blood to the heart in the veins is also particularly noteworthy. This improves circulation and has a positive effect on venous complaints such as varicose veins, thick swollen feet caused by water retention in the tissue, circulatory disorders of the heart and shop window disease. Traditionally, yarrow was used for injuries caused by iron, for example cuts by knives.
Externally, yarrow can be used as a bath, for washes or compresses, or in the form of sitz baths, as in the case of functional lower abdominal complaints in women, and in the form of poultices or rinses for inflammatory diseases of the skin and mucous membranes. In full baths, yarrow tea is suitable for neuralgia, for example. It can also be used externally for ulcers, poorly healing wounds and psoriasis. Freshly squeezed yarrow juice is particularly valuable. It must be very fresh and must not be allowed to ferment. The freshly squeezed juice is considered an excellent blood purifier that strengthens the body's defences. It can also be applied to poorly healing wounds, ulcers and sore nipples. This juice can be taken: one teaspoon diluted in a glass of water 3 times a day.
The essential oil of yarrow is very expensive, but a valuable rarity. Diluted, it can be used for massages, compresses, sitz baths, foot baths and in the fragrance lamp. Diluted and rubbed on the forehead and neck, it helps with headaches, for example, but also for many other uses listed above.
Because of its beneficial effect on the skin, yarrow is also suitable for creams and ointments. Yarrow used as a tea or tincture is therefore suitable for internal and external use. Yarrow can also be found in many mixed teas, especially in women's teas.

During the use of yarrow, wine and coffee should be avoided; severe headaches could result. Do not use in cases of known hypersensitivity to daisies (such as arnica, camomile or marigold)! External use in particular can lead to allergic skin reactions (itchy, inflamed skin, blisters) in certain people. Do not use during pregnancy and breastfeeding without medical advice!

Calendula officinalis L., petals whole, from...
From €7.95 *
Content 0.05 Kilogramm (€159.00 / 1 Kilogramm)
Viewed
Trusted Shops Reviews Toolkit: 1.1.5
This website uses cookies, which are necessary for the technical operation of the website and are always set. Other cookies, which increase the usability of this website, serve for direct advertising or simplify interaction with other websites and social networks, will only be used with your consent. More information
Accept all Configure