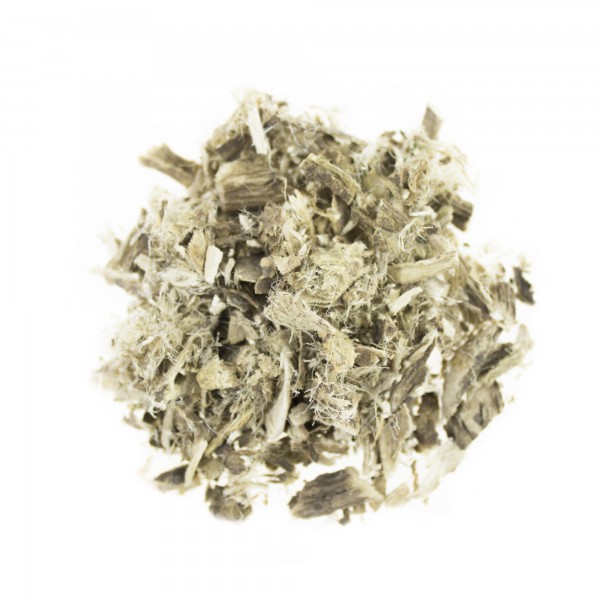 Pour 1/4 l of cold water over 2 teaspoons of cut marshmallow root and leave to stand for 1/2 hour, stirring occasionally. Then stir again thoroughly and strain the tea through gauze. The finished tea is warmed to drinking temperature and drunk slowly in small sips.

Marshmallow belongs to the mallow family and is therefore, like its relatives, an ornament to any garden. Since ancient times, marshmallow has been a highly valued medicinal plant. Its most important ingredient is mucilage, which is found in large quantities. For this reason, marshmallow must not be cooked, but only prepared as a cold extract to preserve the powers of the mucilage. The mucilage of marshmallow has a soothing effect on all mucous membranes, which is why it is mainly used for diseases of the respiratory organs and the digestive system. Marshmallow can also have a soothing effect on irritations of the skin when used as a poultice or bath. In the past, marsh mallows were prepared from the stems, leaves and root of the medicinal plant. Nowadays, however, synthetic substances are used for this sweet.

Marshmallow (Althaea officinalis) is native to southern Europe, but is popularly grown in gardens in central Europe and is widespread across Europe to western Asia. The medicinal plant grows in damp meadows, especially on saline soils; Baltic coast and inland salt patches.

This perennial medicinal plant grows up to 2m high. The marshmallow root, which is spindle-shaped at the beginning, is later replaced by a horizontal, finger-thick, branched rootstock. In spring, the root initially sprouts roundish leaves near the ground that are not tomentose. Only later does the stem grow with three-lobed leaves and velvety hairs. The flowers appear between June and the end of August, sprouting numerous in the leaf axils. The five medium-sized petals are pale pink to white. The fused stamens and pistils are more strongly coloured and reddish-purple. Numerous felt-like, box-like fruits develop from the flowers, rounded at the edges, similar to those of the mallow, to which the marshmallow is related. The disc-shaped fruit breaks up into small sub-fruits. The seeds are kidney to crescent shaped.

Medicinally used are the leaves and roots collected just before flowering but also the flowers themselves.

Leaves - May to June

Marshmallow leaves and roots contain mucilage which has an anti-irritant effect on inflammatory conditions of the mouth and throat and the resulting dry, irritating cough. Furthermore, an anti-inflammatory and immunostimulating effect has been observed. In addition, the drug inhibits the activity of the cilia of the endothelium of the airways and bronchi.

The most important property of marshmallow is its richness in mucilage, especially in the root. Therefore, it can be used wherever an enveloping, protective effect is desired. Marshmallow primarily helps with respiratory diseases and with inflammation and irritation of the digestive organs. It is known as a good cough remedy, especially for small children and at the beginning of the disease. The root is used for this purpose. Extracts of marshmallow root are also used for mild inflammation of the stomach lining. Applying the fresh, bruised leaves is said to help with insect bites. It can also be used to rinse and gargle for inflammation in the mouth. As a gargle for inflammation of the mouth and throat, take the tea made from the leaves and flowers.

Marshmallow extracts should be prepared cold, as heat would reduce the mucilage's enveloping effect and the abundant starch in the root would lead to gelatinisation.

For this purpose, 3 teaspoons of the cut marshmallow root are poured over a cup of cold water and the mixture is left to steep for at least 8 hours (overnight is also possible).

Then strain the tea and warm it slightly to drinking temperature.

Tea made from the flowers and leaves of marshmallow is also prepared cold. However, you only need 1 - 2 teaspoons per cup.

Marshmallow tea can also be used externally in the form of washes, baths or compresses. It helps with light burns, cracked skin and moist eczema. Boils and even carbuncles can be softened with marshmallow poultices. To do this, grate the roots finely and mix them with honey. This paste is spread on a small cloth and placed on the area to be treated, replacing it with a new poultice every 3 hours.

Marshmallow syrup (only for irritation of the mucous membranes of the mouth and throat and dry irritating cough) 10 g (single dose) externally as cataplasm (ointment).

Since a blood sugar-lowering effect was observed in animal experiments, it cannot be ruled out that this also applies to humans. Therefore, diabetics in particular who are receiving medication to lower their blood sugar should only take marshmallow preparations after consulting their doctor.

In the case of acute complaints that last longer than a week or recur repeatedly, a doctor should be consulted.

Mehr Bewertungen
From: Klaus Udenhorst On: 10 May 2018

Mehr Bewertungen
From: Klaus Udenhorst On: 10 May 2018

Peppermint, peppermint leaves, coarse cut, organic
From €4.95 *
Content 0.05 Kilogramm (€99.00 / 1 Kilogramm)
Viewed
Trusted Shops Reviews Toolkit: 1.1.5
This website uses cookies, which are necessary for the technical operation of the website and are always set. Other cookies, which increase the usability of this website, serve for direct advertising or simplify interaction with other websites and social networks, will only be used with your consent. More information
Accept all Configure