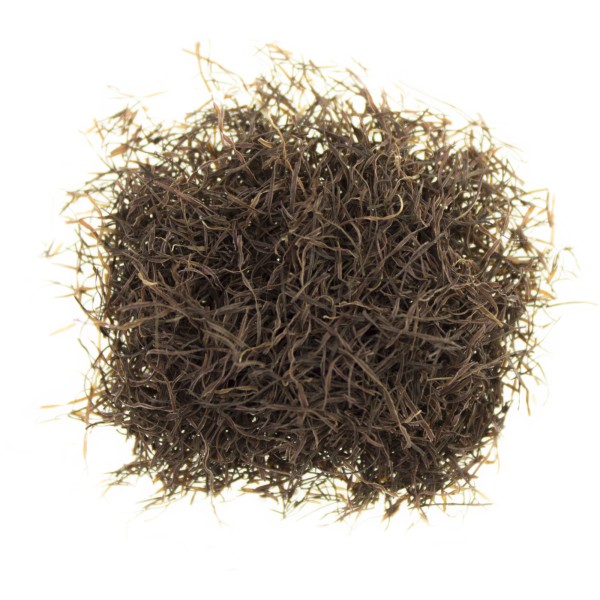 Very effective diuretic (flushing agent) that can be drunk for a long time without contraindications, for urinary retention, acute and chronic cystitis and kidney stones, for heart problems.

History:
Maize is a common and well-known crop and ranks third in world cereal production behind wheat and rice. As a feed grain, it ranks first. However, in Italy, the USA and other countries, maize is also an important food crop for humans. In the form of corn flakes, maize has also found its way into grocery shops in this country. In naturopathy, corn stigmas, Maydis stigma, are used. They consist of the dried thread-like pistils of the female flowers. The drug smells sweet and tastes faintly sweet The beard of the maize plant promotes excretion, stimulates the metabolism and thus helps to lose weight if one is suffering from too many pounds. Traditionally, maize beards are used to support the excretory function of the kidneys. Maize beards are also used for gout and rheumatic complaints. Corn beard tea can also be tried for high blood pressure and constipation. This information is based exclusively on tradition and many years of experience. In China, the tea is considered a means of lowering blood pressure and blood sugar levels and is classified as "neutral" in its thermal effect from the TCM point of view. Maize beard can be taken over a long period of time, even during breastfeeding.
The starch from the maize fruits is a component of food supplements, powders and an auxiliary ingredient in the production of tablets. The valuable maize germ oil is extracted from the germ buds, which is used to prevent arteriosclerosis due to its high content of unsaturated fatty acids.

Occurrence:
Maize originally comes from Central and South America (Mexico), but has also been cultivated in Europe since the 17th century. It grows as far north as southern Sweden and as far south as New Zealand. The largest producing country is the USA, where it is now, unfortunately not only there, also cultivated genetically modified.

Botanical description:
Cultivated maize is a shape-rich, annual, deciduous, vigorously built useful and medicinal plant, which reaches growth heights of 1- 3 m. The round, not or only rarely branched stem is covered with smooth leaf sheaths along its entire length. It is pithy on the inside and can have a diameter of 5 cm at the base. The numerous nodes are in dense succession, especially close to the ground. Shoot-like roots develop from them, which serve to absorb water and nutrients, but above all to give the plant stability. The dark green leaves are up to one metre long, 4-10 cm wide and have a 3-5 mm long, slit or ciliated ligule at their base. The flat leaf blades are slightly rough, sometimes scattered with hairs and wavy towards the edge. The male inflorescences are terminal panicles at the shoot tip, the panicle branches consisting of spikelets arranged in pairs, each with two male flowers. Female inflorescences grow in 1-3 as lateral short shoots in leaf axils on the lower to middle culm. These lateral, short-stalked cobs are completely enclosed by bracts and bear spikelets in pairs in 8-16 longitudinal rows. Each spikelet consists of two flowers, of which only one is fully developed. The ovary is very small (3 mm) but has 20-40 cm long beards at flowering time. Later the withered beards protrude as a brownish bundle from the tip of the cob between the leaf sheaths.

Maize beard has a diuretic effect, probably due to its high potassium content. This is why it is used for bladder and kidney problems as well as oedema, arthritis and rheumatism. It also has polyunsaturated fatty acids, including sitosterol, which have a strong effect on the metabolism of fats and favour their secretion. Hence its success in treating saddle sores (cellulite), dropsy and the tendency to obesity. It also contains salicylic acid and vitamin K, which have analgesic and anti-inflammatory effects.

Special advice:
Due to insufficient experience, do not use without medical advice during pregnancy, breastfeeding or in children under 12 years of age.
Do not use in case of heart problems, kidney diseases or conditions where an increase in urine volume is undesirable.
To support dehydration and purification, drink plenty of water and eat a low-sodium diet. Strongly sweetened drinks containing caffeine and alcohol should be avoided.

Write an evaluation
Evaluations will be activated after verification.
Evaluations 1
Read, write and discuss reviews... more
Close menu
Customer evaluation for "Maize beards, cut, organic"
From: Klein On: 22 May 2018

Marshmallow leaves, cut, organic
From €4.80 *
Content 0.05 Kilogramm (€96.00 / 1 Kilogramm)
Viewed
Trusted Shops Reviews Toolkit: 1.1.5
This website uses cookies, which are necessary for the technical operation of the website and are always set. Other cookies, which increase the usability of this website, serve for direct advertising or simplify interaction with other websites and social networks, will only be used with your consent. More information
Accept all Configure