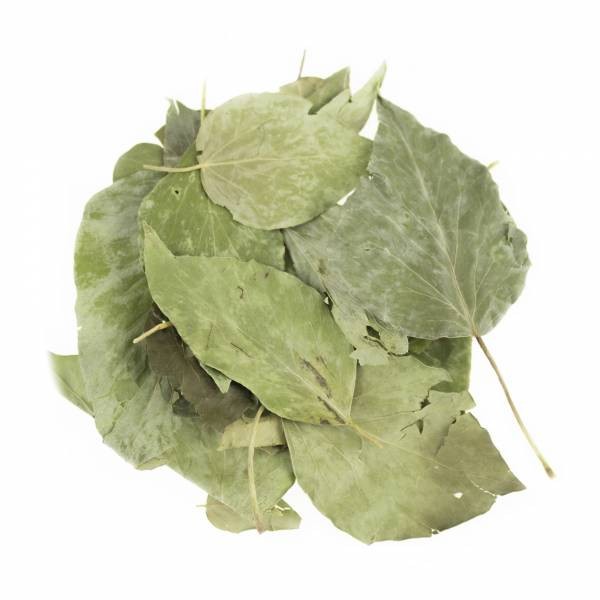 *Please note that the delivered item may differ slightly from the picture as it is a natural product.
This product is currently not available.
Please inform me as soon as the product is available again.
From €4.95
Content: 50 Gramm (€99.00 * / 1000 Gramm)

Pour 1/4 l of boiling water (optimal 80°C) over 2 teaspoons of ivy leaves, cover and steep for 10 minutes, then strain. The tea can be drunk sweetened with honey.

Ivy is a widespread and very well-known plant that not only looks beautiful, but whose leaves also have healing properties. For example, the ingredients of the leaves have been shown to loosen stuck secretions in the bronchial tubes that are difficult to cough up. At the same time, an extract from ivy leaves can have a mild antispasmodic effect, which helps to relax the airways. These properties make ivy an integral part of many different cough syrups.

The effect of ivy leaves

Although several ingredients are responsible for the effect of ivy, it is mainly the so-called saponins that have a large share. Among the saponins, the most important ingredient and also the main constituent is hederasaponin C, which can be subdivided into further subgroups: Hederacoid C, which easily becomes a Hederin, and Hederagenin. Especially the hederasaponin C in combination with the flavonoids contained in ivy can relieve spasms in the respiratory tract. For this reason, ivy leaves are a valuable and effective herbal medicine.

How can ivy leaves be used?

Ivy is often offered, for example, in the form of soluble instant tea, drops, juices, tablets and effervescent tablets. The combination with other plants such as thyme herb or primrose root is useful, so that these plants are added to many ivy preparations. For example, there are preparations of ivy and thyme that help to combat coughs.

Tea infusions of ivy leaves are not considered common and are not recommended because of the recommended daily dose.

Besides the medicinal properties, you can also harness the power of ivy leaves in the home as an organic dishwashing and laundry detergent. To do this, pour boiling water over the ivy leaves and allow the mixture to cool. After straining, the mixture can already be used. If you need even more washing power, you can add some washing soda.