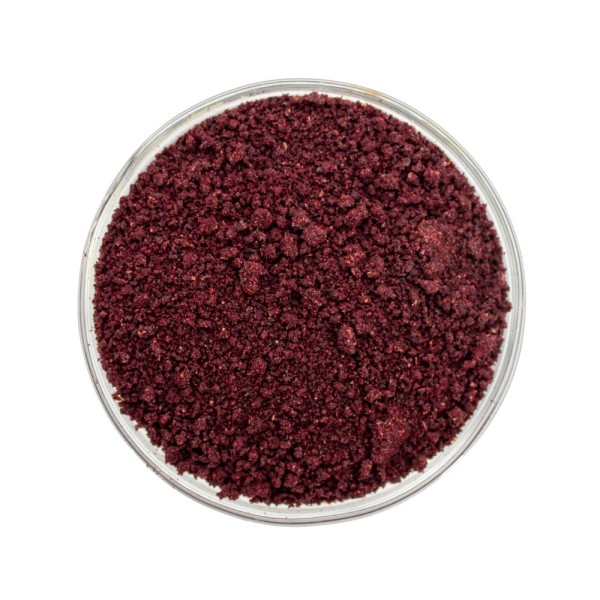 *Please note that the delivered item may differ slightly from the picture as it is a natural product.
This product is currently not available.
Please inform me as soon as the product is available again.
From €5.30
Content: 0.05 Kilogramm (€106.00 * / 1 Kilogramm)

For strengthening the immune system, liver and gall bladder as well as stomach and intestinal disorders

Aronia berries can be used in many different ways. The application is similar to the application of other berries. You can consume chokeberry in the form of juice, puree, jam or chokeberry tea.
To make chokeberry tea, simply pour a cup of boiling water over one to two teaspoons of the dried berries. Let the tea steep for about 15 minutes before straining and drink it in small sips.
In dried form, you can also use the aronia berries to refine desserts, muesli, desserts or as an addition to baking. When ground, you can also add the berries to salt, mustard or vinegar. The berries can also be used for the popular super smoothies or smoothie bowls.

The chokeberry, which is also called apple berry, is a small berry that can easily be mistaken for a blueberry in appearance. Originally, chokeberry came from North America, where it was eaten as a fruit by the indigenous people, mainly as a winter food supply.
At the beginning of the 20th century, chokeberry was officially declared as a fruit and was imported to Russia and cultivated. From there, cultivation gradually spread throughout Eastern Europe until it finally found its way to Germany. It is mainly in the eastern federal states, above all Saxony, that chokeberry is cultivated and marketed as a fruit.
The healing power of the chokeberry has only been recognised in Central Europe in recent years. Since then, it has been used as a medicinal plant, especially for cardiovascular diseases, high blood pressure, arteriosclerosis and inflammations.

The chokeberry belongs to the rose family.

The healing power of chokeberry was discovered in Russia over 50 years ago. Nevertheless, the healing properties of the plant have only been appreciated in Germany for a few years. Due to the superfood trend, however, the small berries are increasingly coming into focus and have already won the epithet "health berry". Rightly so, we think, because chokeberry can positively influence the well-being of our body due to the active substances and ingredients it contains.
The berry can successfully contribute to strengthening the immune system and support the body's self-healing powers. Due to its anti-inflammatory effect, the berry can be used successfully for liver inflammation, inflammation of the gums, gastritis, inflammation of the joints, bladder and kidneys. Chokeberry can also be used for allergies, arthrosis, gallstones and scarlet fever.

Urticae Fol., nettle leaves, ground, from...
From €4.95 *
Content 0.05 Kilogramm (€99.00 / 1 Kilogramm)
Pinus sylvestris, pure loose pine resin
From €6.95 *
Content 0.05 Kilogramm (€139.00 / 1 Kilogramm)
Viewed
Trusted Shops Reviews Toolkit: 1.1.5
This website uses cookies, which are necessary for the technical operation of the website and are always set. Other cookies, which increase the usability of this website, serve for direct advertising or simplify interaction with other websites and social networks, will only be used with your consent. More information
Accept all Configure