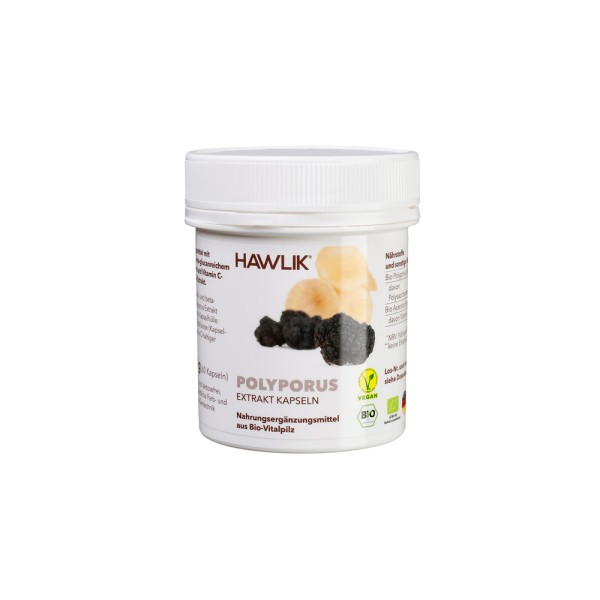 Polyporus umbellatus, also called oak hare, also grows wild in Germany. It is an unknown edible mushroom, but has always been highly valued in Asia because it contains effective biovital substances! In addition to polyporusterones A and B, acetosyringone and a 3,4-dihydroxybenzaldehyde have been identified as the responsible Polyporus ingredients. These active substances appear to play an important role as bioactive components in hair regrowth, although the mechanism is still unclear. The oak hare also contains considerable amounts of calcium, potassium, iron, but very little sodium. The trace elements manganese, zinc and copper were also found.

The extract is obtained from the powder by hot water extraction. Subsequently, only the water-soluble substances are contained.

It is primarily the desired effective polysaccharides and amino acids that are contained in the extract highly concentrated and accordingly effective!

The extract is about 20 times more concentrated than Polyporus powder or tablets.

helpful in the prevention of natural hair loss, can support drainage

2 times daily 2 capsules with plenty of liquid with meals.

Do not exceed the specified recommended daily intake.
Food supplements should not be used as a substitute for a balanced and varied diet.

Store the products out of reach of small children.

Turmeric, Curcuma Capsules, organic, 90 Capsules
€25.90 *
Content 0.054 Kilogramm (€479.63 / 1 Kilogramm)
Royal Jelly Capsules
€25.90 *
Content 0.042 Kilogramm (€616.67 / 1 Kilogramm)
Viewed
Trusted Shops Reviews Toolkit: 1.1.5
This website uses cookies, which are necessary for the technical operation of the website and are always set. Other cookies, which increase the usability of this website, serve for direct advertising or simplify interaction with other websites and social networks, will only be used with your consent. More information
Accept all Configure